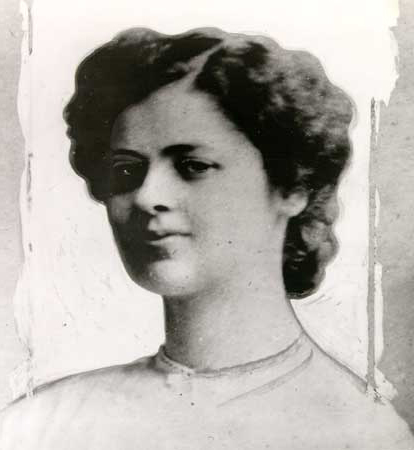 Clara Lemlich has left an indelible mark on the United States as a notable Jewish, female, labor activist. In 1909 Lemlich’s Yiddish language speech set an uprising of 20,000 women workers, motivating them to strike against their poor working conditions. This was the largest female strike at that time. Lemlich’s career as a revolutionary activist did not start in 1909, it began well before her famous speech and continued for more than a half a century afterward. Lemlich was considered the most famous of the farbrente Yidishe meydlekh [fiery Jewish girls] whose militancy helped to galvanize the labor movement; she was also a suffragist, community organizer, and peace activist. Clara Lemlich Shavelson lived and breathed politics from her childhood in revolutionary Russia to her last years in a nursing home in California—where she organized the orderlies.

In 1903, the Kishinev pogrom convinced her parents to emigrate to the United States. Seventeen-year-old Clara was already a committed revolutionary, reading the works of Tolstoy and Gorky. “Like so many young immigrant girls, Clara Lemlich found work in a Lower East Side garment shop. Infuriated by working conditions that, she said, reduced human beings to the status of machines, she began organizing women into the fledgling International Ladies Garment Workers Union (ILGWU) soon after her arrival in New York in 1905. The older, skilled male workers who dominated the union resisted her efforts, but whenever they attempted to strike without informing the women, Clara brazenly warned them that their union would never get off the ground until they made an effort to include women. Over the men’s objections, she brought her women coworkers out on strike again and again in various garment shops between 1907 and 1909.”

In November 1909, despite the warnings of male union officers and of the middle-class reformers of the Women’s Trade Union League who believed that young girls could not sustain a general strike, Clara decided to ignite the long-simmering resentment of tens of thousands of young immigrant working girls like herself. Insisting that she be allowed to address a strike meeting at New York’s Cooper Union, she said: “I am one of those who suffers from the abuses described here, and I move that we go on a general strike.” To the surprise of almost everyone, between thirty and forty thousand young women garment workers—predominantly Jewish immigrants—walked off their jobs over the next few weeks. It was a bitter, only partially successful strike. It galvanized the fledgling International Ladies Garment Workers Union (ILGWU) and set off a wave of women’s strikes between 1909 and 1915 that spread from New York to Philadelphia, Cleveland, Chicago, Iowa, and Kalamazoo, Michigan. But it also set the stage for tragedy when union negotiators failed to advance the young women’s demand for safer working conditions. That lapse would come back to haunt the union on March 25, 1911, when the Triangle Shirtwaist Fire in New York City killed 146 workers, mostly immigrant Jewish and Italian women.

When she retired from the ILGWU in 1954, the unrepentant radical was denied a pension on a technicality. After a long battle she was awarded two honorary stipends by ILGWU president David Dubinsky, but she never did receive a pension from the union she helped to found—and which hails her as a pioneer on every major anniversary.